Resurrection in Relationships - article in Cafe 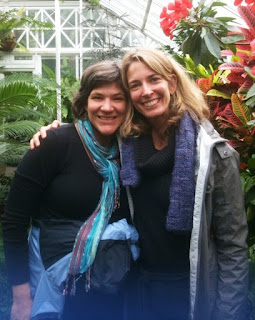 Hi - occasionally I write for Cafe, the online magazine for young women of the ELCA. This month, the article is about resurrection in relationships. I wrote a Biblical Reflection on Joseph and his brothers. In the main article I outlined the resurrection of one of my dearest friendships, with the friend's permission of course. This picture is of the two of us just a month or so ago before she gave birth to her beautiful daughter. Link to the articles here.
Peace and joy - Sarah
- April 09, 2011 1 comment: Links to this post

Descended into where? Hell, evil, and all sorts of things I never learned about.

10 adults from our church are preparing to be confirmed/affirm their baptisms on the Easter Vigil (the night before Easter). They have been in a class for the past year that I have, admittedly, packed a wee bit too much into. Last night, as we prepared to cover the 2nd article of the Apostle's Creed "I believe in Jesus" in 10 mins, we got off track and the conversation went to hell - literally.

We started talking about hell. Where did Jesus go when he died? Did he die and just lie there dead or did his life after death begin immediately. Is hell a real place that you can go to? Did he go into the hells on earth in some spiritual way and conquer them? What happened? I was feeling a wee bit over my head (can't we just talk about grace some more???).

And then, we started talking about evil. I mentioned a couple of times that I've known I was in the presence of evil (at a battered women's shelter working with someone in the addictive grip of abuse; at a church in Rwanda that was the site of a genocidal murder). Others had their own experiences (at a German concentration camp; the events of September 11).

I said, but we Lutherans don't talk much about evil in a spiritual form - we talk much more about its manifestations. Evil as it appears in war, poverty, addiction, death. We talk a lot about sin and believe it is critical to address sin head on. But we do less with evil. Which made one of the natural theologians in the class say: why not? Scripture is full of it, isn't it?

So, we have research to do:
1) Why did we replace "hell" with "dead" in the apostles creed. And just what is normative for Lutherans re: hell?
2) What role does spiritual warfare have in Lutheran theology? What is evil?