Called to care for creation.

I came away from the Chautauqua Institute convicted that I can do more and be more than I have been.  A sense of call pervaded the speakers and other pastors that I met.  Inspired by the passion of others, I reflected: "what is unique about me and my calling?  What do I care about and what can I do about it?"

I have decided to recommit myself to environmental work.  Since my childhood, I have felt connected to God in nature and have been concerned about the future of the earth.  In high school I wrote a big paper on the destruction of rain forests.  20 years later, the issues I cared about then have only become worse.  This summer has had such strange weather that people who used to be climate change deniers are now realizing that climate change is not only real, it is upon us.

One of the things I'm excited about my new pastoral call is that the congregation where I'm headed, Peace Lutheran in Alexandria, has already shown a committment to ecological concerns.

I don't know what it means that I am recommitting.  I've thought of trying to become a regular blogger re: the environment or redoubling my efforts to work with our DC area churches. But I also have a hunch that as important as inspiration and thoughtful conversation are, I will have to get myself and others more involved in the political realm.

I figure putting it out there in the public will help me actually commit to it.  So here goes.


I'm at the Chautauqua Institute for the New Clergy Program (renewal and interfaith conversation for clergy in their first 7 yrs of ministry).  My mom came with me.  Great mother/daughter bonding time has been a bonus to the point of the week: to learn about pluralism, especially between the Abrahamic faiths (Judaism, Christianity and Islam) with a group of new-ish clergy from many denominations.

The days are full of lectures, conversations and worship on the theme "Radicalism: blessing or curse."

Today we heard Eboo Patel, writer, thinker, and executive director of the Youth Interfaith Core.  He spoke at the launching of his new book, "Sacred Ground: Pluralism, Prejudice and the Promise of America."

His lecture ranks up there with Al Gore's "An Inconvenient Truth" and Jane Goodall's "Reason for Hope" as one of the best lectures I've ever heard.

Patel defined radicalism as going back to the roots and then examined the roots of America to make the case that religious pluralism is what makes America great, and radical.

He quoted at length from George Washington and Thomas Jefferson and Martin Luther King Jr to demonstrate that the greatness of our country relies on its commitment to pluralism. He didn't gloss over ugly parts of American history, but said that "the force of pluralism can defeat prejudice."  He believes that the same forces that made the civil rights movement possible in the 60s are at work in America now.

Besides being able to articulate the broad sweep of American history with clarity and humor, his rhetorically beautiful lecture was also impressive because he didn't use notes.

I, on the other hand, was clumsily typing snippets into my phone in an effort to remember all he said.  Then I bought the book.  No time or energy to fully synthesize what was so great about his talk, but here are a few of my notes.  They may not be exact quotes so please get the book and read him directly if you're so inclined.

...When lamenting the fervor of anti-muslim sentiment during the discussion of the Muslim Community Center near ground zero in 2010, an adviser told him he was missing the better part of the story, the hope: "These are the moments that change agents hope for.  Our country is molten and can be shaped."

...talking about the pain of pluralistic culture: "everyone feels half full...you can't get all you want all of the time."

...discussing how to interpret the Koran, Patel related what he learned from a mentor: "The Koran has to be interpreted in light of its chief value: Mercy."  (For Christians, he said it's love.  So our texts need to always be in service of love and those that don't seem loving need to be put in line, somehow, with the larger value.)

...On the variety of cultural/ethnic/religious/sexual identities in America: "the dash between Muslim and American is a bridge, not a dividing line."

Ok - those just a few notes.  The big takeaway is that America will grow stronger as pluralism is protected.  That's not a new idea, but it's sure an inspiration to hear, especially from someone who has strong faith commitments but isn't threatened by others with equally strong commitments.  You can bet I will google his blogs and articles (there are lots) and read as much as I can.
- August 14, 2012 No comments: Links to this post 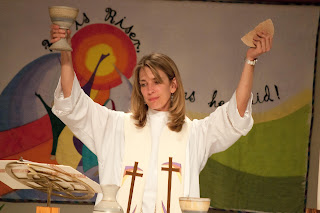 While I was giving out the bread at communion at the early service last Sunday, one of the ushers slipped in line.  As I handed her the bread she whispered "come see me after communion."  I left the sanctuary as the congregation stood for the closing hymn: "I am the bread of life."

The usher had just received a phone call letting the church know that a beloved member, K, had died.  Her death came sooner than we thought it would, but it wasn't a surprise. K had been suffering since Christmas.  She called in hospice earlier in the week and I'd visited her and her husband.  Our time together was of a different quality than earlier times.  I am leaving the church, but she was facing her death.  When we said goodbye, we knew we would not see each other again in this world.

After receiving the news, I came back into the sanctuary mid-hymn: "I am the resurrection and the life. If you  believe in me, even though you die you shall live forever."  I choked back the tears.  The kingdom of God was near.

These last weeks have been full of grief.  Two weeks ago, a dear friend learned that his 32 year old son died while mountain climbing in Peru.  I'd never met the son, but I happened to be with the family when they got the terrible news.  Witnessing their pain, it was impossible not to hurt as well.  A huge crowd gathered for the funeral yesterday.  It was a testament to a life lived in faith and a death that is not the end.  Still, hearts are breaking.

These last weeks have also brought the 2-year anniversary of a college friend's death; the end of a marriage of someone I care about; the shootings in Aurora and Wisconsin.  Plus, I'm grieving my church.

At the late service, as I started in on the Eucharistic Prayer (the long one where we say take and eat...) I knew I was going to cry.  It was the last time I'd preside over communion at Prince of Peace; K's death was in the front of all our minds; my friend was preparing for his son's funeral; and I was staring out at a congregation full of people I'd grown to love, many of whom were tearing up as well.

When I lifted the bread, tears started flowing.

I went slowly through the prayer, having to pause often to regain confidence in my voice.  "who on this day overcame death and the grave...we await that day...so let your church be gathered...that all may be fed..."

I've never seen a pastor cry at communion before.  For a moment I felt embarrassed, but then I thought: what better time to cry than communion? What better time to realize how much love is coursing through the world than in that exchange?

Handing out the bread there were times I could not get the words out. I distributed communion while tears ran down my face.  I suppose it might sound kind of beautiful, except that I'm not a pretty crier. Snot was mixing with tears and I was trying not to drip on the bread. At one point I had to get a 2nd purificator (little holy handkerchief) to wipe my nose. The congregation received the bread with their own mix of smiles and tears.  Someone with hands outstretched looked at me with understanding and twinkling eyes.  She whispered "bigger piece please" and winked, and then I started laughing too.

As I walked out of church for the second time, singing the same hymn, through the tears I felt the conviction of faith well up.  I sang as clearly as I could:

"Yes Lord, I believe, that you are the Christ, the Son of God, who has come into the world."

In the face of grief, there's no greater gift than faith.